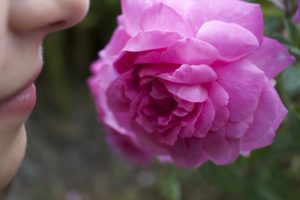 Professional Smellers
The human nose is incredibly sensitive and can distinguish nearly a trillion different scents. When scientists tested the sense of smell of professional perfumers it was found that “the regions of the brain associated with olfaction are more developed in professional perfumers than in the general population.” Are perfumers born with naturally heightened sense of smell? Many in the industry do not believe this to be true. Perfumers simply use their nose more. Often they are born into a perfuming family and grow up training their nose to be more discerning.

A Rose by Any Other Nose
As with everything in our bodies, genes control our sense of smell, and no two people smell things exactly the same. Our evolution has created a genetic “bar code” that results in a different combination of olfactory sensitivities in different individuals. In a study that asked people to rate 66 odors for intensity and pleasantness, the responses ranged from intense to weak, pleasant to unpleasant, but with most in the moderate range. However, one study showed that with a particular substance, 50% of responders smelled nothing, 35% found the scent to be a powerful urine-like smell, and for about 15% it was floral and musky.

Smell Disorders
Smell loss is the most common type of olfactory disorder. Hyposmia is the medical term for the reduced sense of smell and anosmia the absence of the sense of smell. Challenges with sense of smell can come from various sources including deviated septum in the nose, viral damage to the lining in the nose and the olfactory receptor smells, head trauma or other conditions of the brain (Alzheimer’s, stroke, etc.), alcohol or drug abuse, and for some people there is no known cause.

Olfactory Training
Can olfactory training improve the sense of smell? One study investigated whether “repeated short-term exposure to odors over a twelve-week period would have any effect on the olfactory ability of a group of anosmia sufferers.” In this case, one group received four synthetic oils (rose, eucalyptus, clove and lemon) and strict protocol for sniffing them daily. The other group did not participate at all in training. Both groups were tested at the beginning and end of the twelve-week period. It was found that about 30% of the group that had undergone the training experienced some improvement in olfactory function, compared to those who had not had any olfactory training. Further research needs to be completed, however, these results and those of other studies show that the sense of smell does can be improved and recovered.

Smell has a huge impact on quality of life, playing a large role in mood, memory, and emotion, and is a significant part of many of life’s experiences and pleasures. SensoryCo is a national leader in scent effects and has created an array of non-toxic aromas and malodors for various immersive multisensory training protocol and other uses. Additional developments include olfactory input in the treatment and prevention of PTSD and other medical scent training applications. Contact SensoryCo to partner on these and other innovative sensory projects.