Exposure to odors and malodors delivered by scent generators in live immersive military training programs has an impact on critical decision-making skills necessary for optimum troop performance in chaotic environments.

The battlefield is an assault to the senses, affecting performance levels and attacking the human body, mind, and spirit. Atmospheric effects such as heavy smoke, loud noises and overwhelming odors and malodors delivered by scent generators can further confuse an already chaotic situation by impairing vision, making communication difficult, and inciting involuntary responses. By its nature, war is characteristically a combination of chaos and uncertainty often referred to as “The Fog of War”.

The commonly held definition of the fog of war is: the uncertainty in situational awareness experienced by participants in military operations. The term seeks to capture the uncertainty regarding one’s own capability, adversary capability, and adversary intent during an engagement, operation, or campaign.
(German: Nebel des Krieges)

Troops must be mentally and physically prepared to deal with the daunting challenges they might face in military training programs, as well as on the battlefield where exposure to odors and malodors shock the sensory system adversely affecting decision-making skills and the ability to perform.

According to Gary Klein (1999), Sources of Power, Cambridge, MA: MIT Press, p. 3-44; “During time-constrained, chaotic, and uncertain situations the human brain defaults to what comes easiest and natural – intuitive or naturalistic decision-making.” 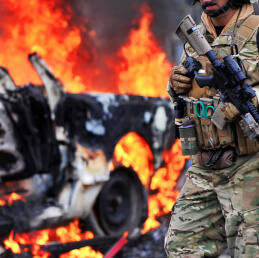 Participants in live simulated training environments are shown to engage all their senses in action and a complete immersive experience creates memory tags that can be triggered when confronted with similar circumstances. SensoryCo can deliver different relevant smells with sophisticated scent generators to add a layer of authenticity to training programs by conditioning students to recognize odors or malodors and learn unfamiliar scents to better prepare for field performance. The more repetitive exposure to a particular scent, the better the mind and body are conditioned to recognize a specific scent in times on uncertainty. As such, providing, authentic, live immersive military training programs that introduce the realities of “The Fog of War” can prepare troops to instinctively respond in combat scenarios.

In his paper “The Fog of War: A Necessary Component of Modern Warfare,” Sean Mikael Elward MAJ USMC, presented his views to the Naval War College stating, “the ambiguity and uncertainty characterized by the fog of war must be institutionalized and become a central tenet of operational art as well as a driving influence in the U.S. military’s preparation and training for war. Nowhere does the associated implications of the fog of war have greater impact and effect than on information processing and decision-making. Therefore, leaders at all levels must be aware of the human aspects of information and be trained to develop an adaptive, flexible, intuitive mind in order to deal with and make decisions in an uncertain, chaotic, dangerous, and fast-moving environment.”

An effective military training program imitates real-life conditions as closely as possible. The use of 4D type, sensory stimulating exercises give soldiers the opportunity to face genuine situations and materials that they may encounter in field operations. Prepared and well-trained forces are critical to the success of military operations, engagements and interests. Military actions require meticulous coordination, detailed organization, precision training and dedicated equipment to ensure the best outcomes. Live, immersive military simulations, role-playing, and realistic warfare modeling are viewed as an integral component to test and refine strategies, identify strengths and weaknesses, and develop tactical solutions. SensoryCo scent generators can complete these training experiences by introducing authentic medical, chemical and battlefield odors and malodors into invasion, battle, conflict aggression, and fighting scenarios to reduce the impact of the “Fog of War” and enhance human decision-making when it counts.

* These fields are required.