BENEFIT: Olfactory stimulants set the foundation for scent recognition and have been shown to affect cognitive learning behavior and as well as performance. When odors and malodors are used in training scenarios, fire personnel become better conditioned to recognize specific scents to increase their ability to perform. 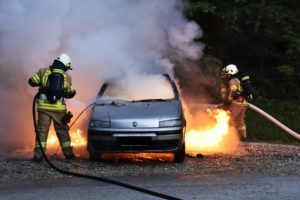 Firefighting is a demanding and hazardous profession and first responders must be mentally and physically prepared to deal with the daunting challenges they might face. Firefighters respond to emergencies in a variety of different settings and therefore, might be exposed to many different hazards. Saving lives and protecting structures while taking measures to put out the actual, fire can take its toll on the mind and body. Some common field hazards include carcinogenic chemical or gas exposure; smoke inhalation and other respiratory hazards; heat stress; unstable structures; electric shocks and burns; infectious disease exposure; injury to peers or victims. Imagine coming upon a disaster scene where lives have been lost. To perform your job you need to know what to expect when you see, hear, touch, taste, and smell the scenario. Scent recognition is helpful in most emergency situations, because firefighters in the field are exposed to olfactory stimulants and malodors that shock the sensory system adversely affecting their ability to perform.

Science has long shown that odors and malodors impact mood and cognition. In addition, research has shown positive emotions and moods increase productivity, persistence, and performance. In a study by Rachel S. Herz, Corrente Schankler, and Sophia Beland, Ofaction, Emotion and Associative Learning: Effects on Motivated Behavior; 2004, it was noted that “Associative learning, the process by which one event or item comes to be linked to another through experience, is critically involved inhuman cognition and behavior” referencing Wasserman, E. A., & Miller, R. R. (1997). What’s elementary about associative learning? Annual Review of Psychology, 48, 573–607. Herz, Schankler, and Beland conducted research experiments to examine how olfactory stimulants affected the ability to learn and affected subsequent behavior. To conduct this study, the researchers introduced different odors and malodors to participants taking tests. They found that those subjects exposed to positive odors (or those that did not have an odor introduced at all) vs. negative odors performed better on their tests. In addition, it may be interpreted that exposure to the smells more than once, triggered a memory response and scent recognition or “emotions elicited by associative learning to ambient odor.”

Based upon the research findings above, a case can be made that introducing relevant smells in firefighting training programs might condition students to recognize negative odors and learn unfamiliar scents to better prepare for field performance. Smoke, natural gas, fuel, burning wood, or the smell of human decay are some of the odors or malodors firefighters come into contact with at the scene of an emergency. SensoryCo aroma generators can release these specific olfactory stimulants to enhance live immersive training simulations and provide scent recognition. The more repetitive exposure to a particular scent, the better the mind and body are conditioned to recognize that ambient aroma. Firefighters put themselves on the line as they tackle massive tasks that require them to perform in circumstances that truly assault their senses. Preparing firefighters with a full sensory experience in learning environments can provide better training for firefighters to perform under extreme pressure.